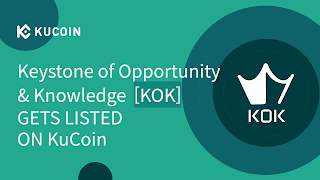 https://www.kucoin.com/
KOK Token Listed on KuCoin, World’s 5th Largest Cryptocurrency Exchange
We are pleased to inform you that KOK token has been listed on the major global exchange
“KUCoin” USDT market. KuCoin is a high-quality exchange ranked in the top 5 that comprehensively evaluates traffic, liquidity, and trading volume in CoinMarketCap, with a daily trading value of nearly 3 trillion won.
The listing of KOK token on KuCoin is a significant move exhibiting KOK token’s recognition of value and technology, laying a foundation for stable growth through more transactions in the future.
KOK token has been growing steadily since its first listing, drawing a steady upward curve. We will continue to make progress in the ever-changing cryptocurrency market and make a leap forward as a major global cryptocurrency.
-KuCoin Official Page: https://www.kucoin.com/
-Listing Notice
https://www.kucoin.com/news/en-kok-gets-listed-on-kucoin?utm_source=twitterinfo
-Listing date: June 4, 2021 (Fri) 7:00 PM (GMT+9)
-Token symbol: KOK
-Trading Pair: KOK/USDT
With this listing, KOK tokens will be available to trade on a total of 4 global exchanges: Bithumb Global, ZBG, Bittrex Global, and KuCoin. We are working hard to be listed on additional global top-tier exchanges to increase the value of KOK tokens and improve transaction convenience, so please keep an eye out.
Thank you. 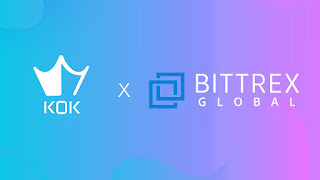 Greetings from KOK with more good news and updates.

In recognition of its excellent technology and business, KOK has been listed on the BTC and USDT market of Bittrex, a global crypto exchange.

As Bittrex is the number one cryptocurrency exchange in the United States, they are also well known for fast transaction speed, high security, and strict compliance.

Thanks to growing interest in KOK by members in North America, listing on one of the best exchanges in the US could not have come at a better time.

The KOK Foundation is doing its best to list on the top exchanges at the optimal timing by analyzing the market in close detail.

Acccordingly, since ZBG and Bithumb’s global listing, KOK’s price has now risen by nearly 50%, and the daily trading volume is also higher than that of other cryptocurrencies.

With the recent surge of Bitcoin and Ethereum, KOK’s uptrend is expected to continue as the interest of North American users as well as the positive atmosphere in the cryptocurrency market grow together in parallel.

However, KOK will not rest on its laurels, never tiring of pursuing a better tomorrow that surely awaits…those who seek it.

We are always grateful to you, our Frontier members for being our companions and partners in this exciting journey of endless opportunities.

Stay tuned for more major developments to come your way! 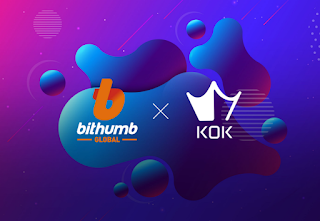 ‘KOK’ will be listed on Bithumb Global.

Many projects are currently traded in Bithumb Global, a well-known exchange to be listed before the listing on Bithumb Korea.

‘KOK’ has been promoting this Bithumb Global listing to expand the global trading of KOK Tokens.

‘KOK’ plans to provide an additional environment where globally distributed users can trade more conveniently in the future, while also gain recognition of ‘KOK’ from users on the exchange to increase its value.

With the listing on the Bithumb Global Exchange, the contract has been upgraded from the existing contract to a new contract to enhance security.

‘KOK’ has steadily performed including game launching of Hotel King and Magia, listing on global exchanges, and launch of shopping mall on ‘KOK.’

We will continuously show even greater performance.

KOK, Listing on Global Exchange, ZBG, and the Vision.

Hello, KOK users. We are pleased to inform you the first listing of KOK.

KOK Token will be listed today on ZBG, the famous global exchange.

ZBG is a recognized exchange with billions of dollars in daily trading, where numerous and outstanding cryptocurrencies are listed. KOK has been promoting the listing on global exchanges with the support and, finally, choose ZBG as the first exchange to be listed. This listing is a strategic listing to achieve better value proliferation with users of KOK . In addition, it will be the foundation to clarify the vision of KOK to the global cryptocurrency users.

KOK platform, which currently leads various Korean wave contents distribution and product distribution, plans to create a global content platform instead of simple cryptocurrency transaction in the market. The platform will grows into a global service in various fields including culture and art contents, games, and finance by utilizing the advantages of blockchain: ‘transparent wealth distribution’ and ‘convenience of exchange’

KOK , a converged platform based on actual business models, integrates cultural content, games and finance into the blockchain to utilize cryptocurrency in real-life, and is going to solidify its role as a platform that can be conveniently accessed by people around the world. A recent article stated that KOK is one of the most anticipated blockchain in the world in 2020. We are very pleased with this evaluation, and want to express our gratitude to all the supporters who have contributed to the development of KOK. Starting with the listing on ZBG, we will do our best to build greater value and a better future together with you.

(EN)Experience the platform in advance

●。Total amount of deposit / Monthly rate of return
Mined KOK will be paid out at 1 o’clock (GMT+9) the next day.